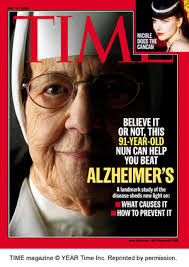 They were given regular physical check-ups and cognitive tests, and when they died their brains were all donated for autopsy.

In some of the brains, researchers discovered that despite the presence of plaques and tangles and brain shrinkage -the owners of these brains showed no signs of having the disease while they were alive.

These nuns had a high level of cognitive reserve.  So even if these nuns had a disease like Alzheimer’s compromising some neural connections, they’ve got extra reserve in the cognitive bank which acts as a buffer.