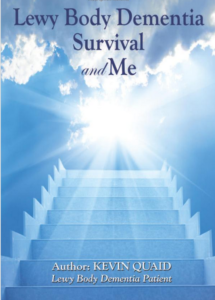 Lewy Body Dementia Survival and Me

This book boasts many attractions, the most important of which is that it is the author’s lived experience and is the first book ever to be written about Lewy Body Dementia by a person diagnosed with the disease.

The author, Kevin Quaid, is an Irish man with a love of Munster GAA, who has travelled the long path to diagnosis often experienced by those with rarer neurological conditions. Kevin was wrongly believed to have Parkinson’s disease until finally being diagnosed with Lewy Body Dementia.

In his book we learn that Kevin is not easily defeated.  He is a survivor, not a victim, and he encourages anyone to think along these lines.  Despite the fluctuations that are common with Lewy Body Dementia (managing well one day and struggling the next) he keeps spreading his gospel of hope in dementia both across Ireland and the wider world.  He campaigns for more and better information and supports for people with dementia and their supporters.

I first heard of Kevin in 2018 after reading an article in the irish Times where he spoke about dementias whose main presenting problems weren’t arising from memory loss but from hallucinations, tremors and sleep issues.  He had written this book by then, a year after finally receiving his diagnosis.  I met him in 2019 and the enormity of his personality, his sheer size and wonderful loud laugh would make you want to listen to him for hours.

Kevin’s book provides insights into the hallucinations and nightmares that are typical of this type of dementia ” reality seems so real but it’s just unreal”, but his central message is one of hope, encouraging his readers to find others in similar situations and to seek support.

He doesn’t shy away from the difficult personal questions that he has faced: why has this happened to me; was this something I was born with; is this a result of the life I have lived? He finds his own answers to some of these questions but not for all.

Kevin also speaks about very raw thoughts and feelings, including suicide and loneliness, and gives a truly heartfelt account of the ups and downs of the lived experience, culminating in someone who now is standing tall – at six foot and one inch – a man on a mission, preaching his message to everyone who wants to listen.  Recognise the person and not the disease!

Kevin understands that his dementia is a life limiting condition; but instead of being filled with dread he ploughs on with plans.  He has too much to do and chooses to see Lewy Body Dementia not as the end but as the beginning.