This late afternoon seminar, chaired by Professor Suzanne Cahill, which took place in Trinity College’s Long Room Hub on May 20th, and titled “Taking Dementia out of the Closet: A World without Stigma” attracted an audience of some 100 people including health service professionals and lay people.  The keynote speaker was Professor Perla Werner a Social Gerontologist and Vice Rector of the University of Haifa.  Her presentation titled “Stigma and Alzheimer’s disease: why study it”, explored the multi-faceted dimensions of stigma including (i) self, (ii) public, (iii) courtesy and (iv) structural.   Interestingly her work, based on a systematic review of the literature (48 studies published over 22 years) shows that in general, public stigma associated with dementia is now low, but family stigma i.e. courtesy stigma is high and this type of stigma which includes family shame and guilt, contributes significantly to caregiver burden and often results in family caregivers attempting to conceal their difficulties from others. 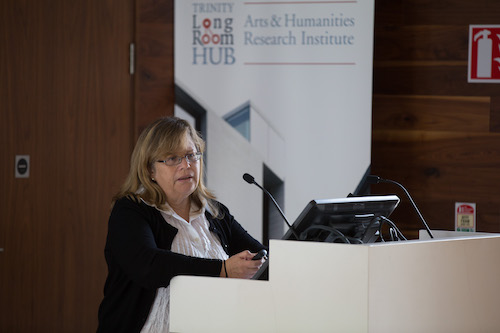 The second half of the seminar involved local experts who provided their own individual perspectives on stigma and dementia.  Ronan Smith opened this session with a very honest and powerful account of his coming to terms with both his own and his father’s diagnosis.  He talked openly about the decision he made some time ago, to “go public” with his diagnosis, when several of his good friends advised him otherwise.  He provided rich insights into the courageous strategies he has adopted to live life well, despite his diagnosis and move forward.   Ronan continues to work as a theatre producer, has become a great advocate for dementia and enjoys an active family life.  His talk was then followed by that from Sean Donal O’Shea, who gave a snap-shot overview of the personal dilemmas faced, devoting himself selflessly to caring for his mother, Debbie diagnosed with young onset dementia. Sean Donal addressed the difficulties his mother is confronted with, in particular, her being forced to give up some of the things she loves including dancing.  He talked about stigma and social isolation; how some of his mother’s friends have literally moved away, but he also highlighted the richness of his journey with his mother and the life changes he has made because of her illness, from working in the construction industry to the achievement of a first class honours degree in Applied Social Studies in Social Care.

Tina Leonard, Head of Advocacy and Public Affairs at the ASI then followed with an excellent presentation on the role the ASI plays in tackling stigma in society.  Tina reminded us of current prevalence rates and pointed to the importance of language in dementia care and putting the person at the centre stage.  Her presentation was then followed by that from Fidelma Browne, Head of Public Communications Division, HSE, who provided us with a helpful overview of her division’s experience in conducting public awareness campaigns and the plans the HSE now has, for rolling out a new dementia awareness campaign as part of the National Dementia Strategy.  This work is due to commence in June of this year.

The final presentation came from June Shannon, a journalist, who gave us a compelling account of the media’s role in providing a balanced account in writing about dementia and some of the choices and dilemmas she herself has personally been confronted with, when attempting to write on this topic.   Just as there are guidelines for journalists on topics such as mental health and suicide, June argued there is a need for guidelines on dementia to be developed for journalists.  The seminar concluded that stigma in the context of dementia is still rife in Irish society.  Some additional recommendations were forwarded as to how this could be further combatted.